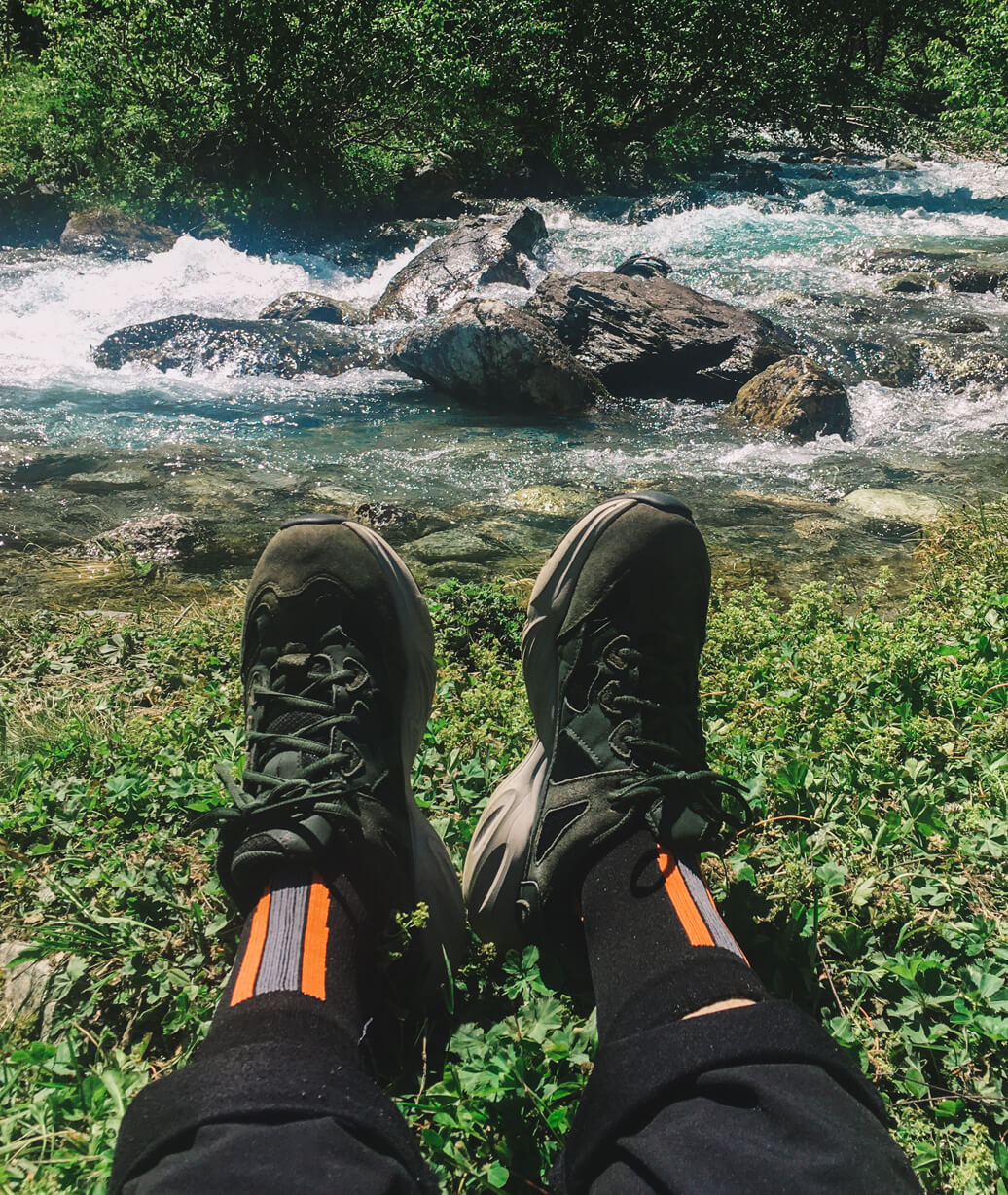 Waterproof membrane prevents rain, snow, mud, sand, dirt and germs from getting inside your socks. It also offers protection against mosquito bites and much more.

Mugu Karnali Nadi is a very cold and fast river. We spent the night at an altitude of only 2000 meters above sea level, but this time the night was cool. And noisy. At first I even doubted that I would be able to sleep under such a roar of water, but fatigue took its toll. 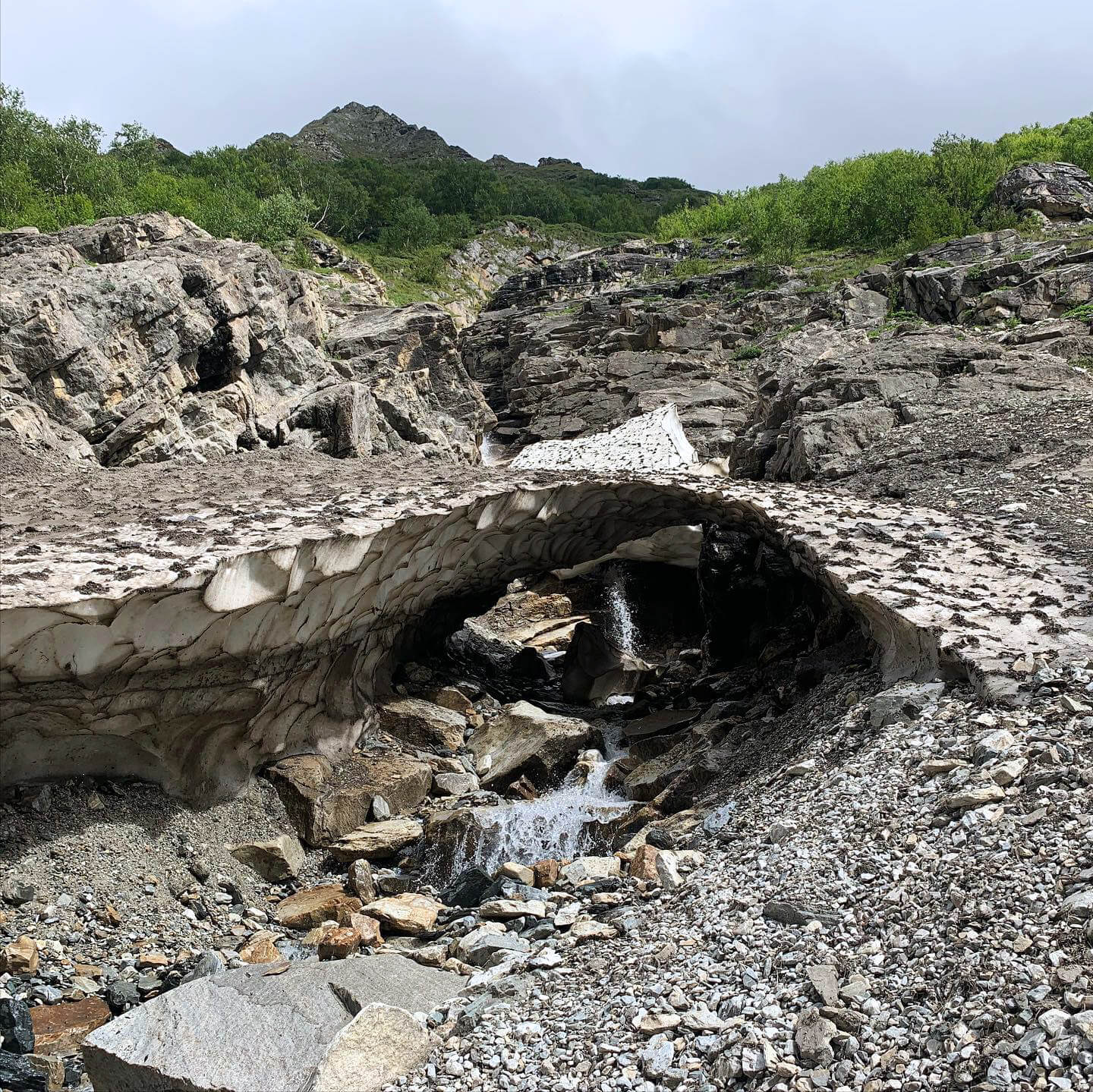 Today we have gained another 300 meters of altitude. The gorge continues to delight with its beauty. There are quite a few waterfalls of various shapes and sizes. There is a lot of greenery, the banks of the river are very different. And the river itself is very different: in some places it is almost flat (only it flows faster), and in some places there are powerful rapids with a huge difference in altitude. On the path, stones are constantly found, as if covered with a layer of silver. They look amazing in the sun, but they do not work at all in the pictures. When the entire path is lined with such stones, there is a feeling of some kind of magical road.

This wildest fig is now ubiquitous. I was already convinced that it was a fig, but there was no interest in trying it. There are also apricot trees in the forest: we found broken branches with fruits on the trail several times, but we did not see the trees themselves. And these apricots are still quite green. There is also a lot of herb very similar to mint. She has a pleasant smell, but very faint. 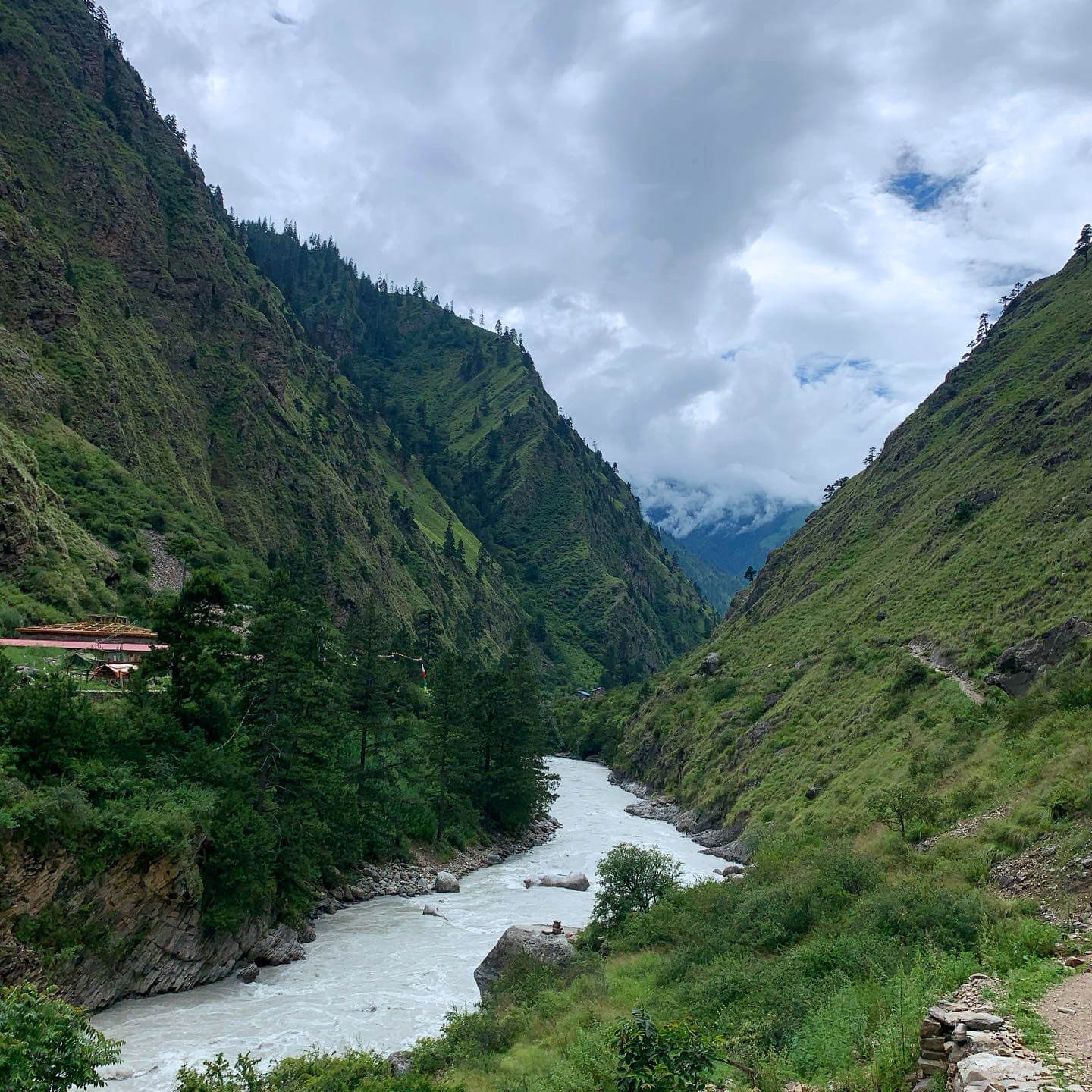 Mugu gives the impression of a much more civilized area than Humla. Many new houses, people dressed much neater, many shops with at least some choice of goods.

We stopped for lunch at another local regional center - Pulu. There is even a bank branch here. And just in front of this very branch of the bank, we saw how Buddha distributed medical masks to the local population.

Yes, Nepalese Police Chief Sergeant Gee. Es. The Buddha gathered local residents, told them for a long time about the dangers of coronavirus, distributed masks to everyone and made sure everyone was dressed. All dressed up. But after 10 minutes, the only one on the street wearing a mask was himself. The people here are indifferent to the observance of precautionary measures.

Somehow imperceptibly in the course of our movement Buddhism began to prevail over Hinduism. After Pulu, there is no longer a smell of Hinduism. Inscriptions in Tibetan began to appear on the rocks, stupas and chortens are increasingly common. 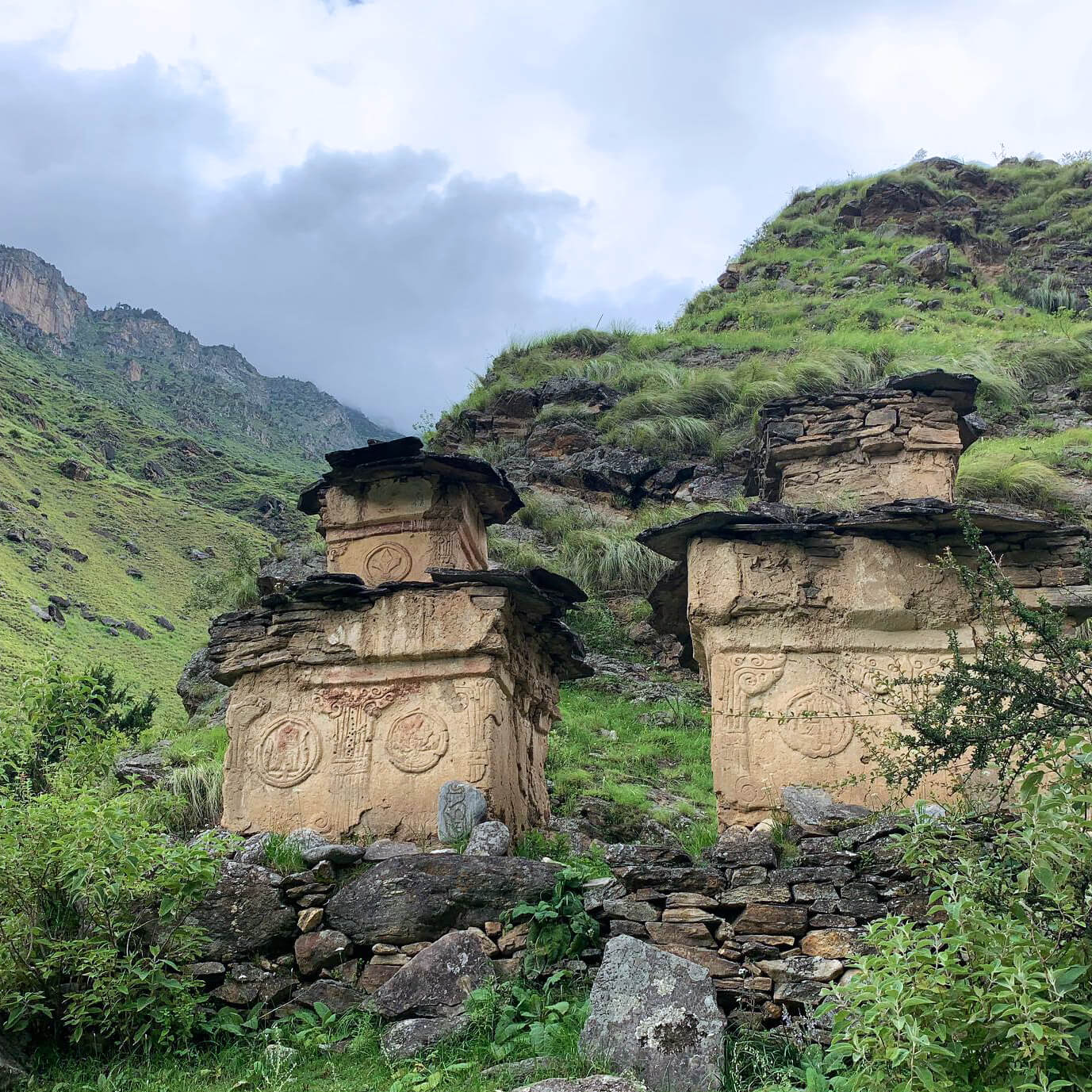 Today is a short walking day: it will not be possible to go further than the planned place to spend the night, since there is no other normal place for camping many kilometers ahead. We stopped at the confluence of two rivers: Mugu and Langu. Together they form the very Mugu Karnali Nadi. The Tihar gompa monastery is located at the confluence of the rivers. The monastery is closed, no one is around. Although there is no feeling of complete abandonment either. We got up right in the courtyard of the monastery. The guys settled down in the monastery kitchen, and I put up a tent almost at the entrance to the gompa building. I hope for interesting dreams ...

On the way to the monastery itself, on the very bank of the Mugu River, there is a group of chortens of various degrees of antiquity. I went there to meditate before supper. I liked it very much. The place clearly disposes of relaxation - it somehow fell into nowhere very quickly.

Tomorrow we are climbing more aggressively, so we decided to take advantage of the short walking day and go to bed early. 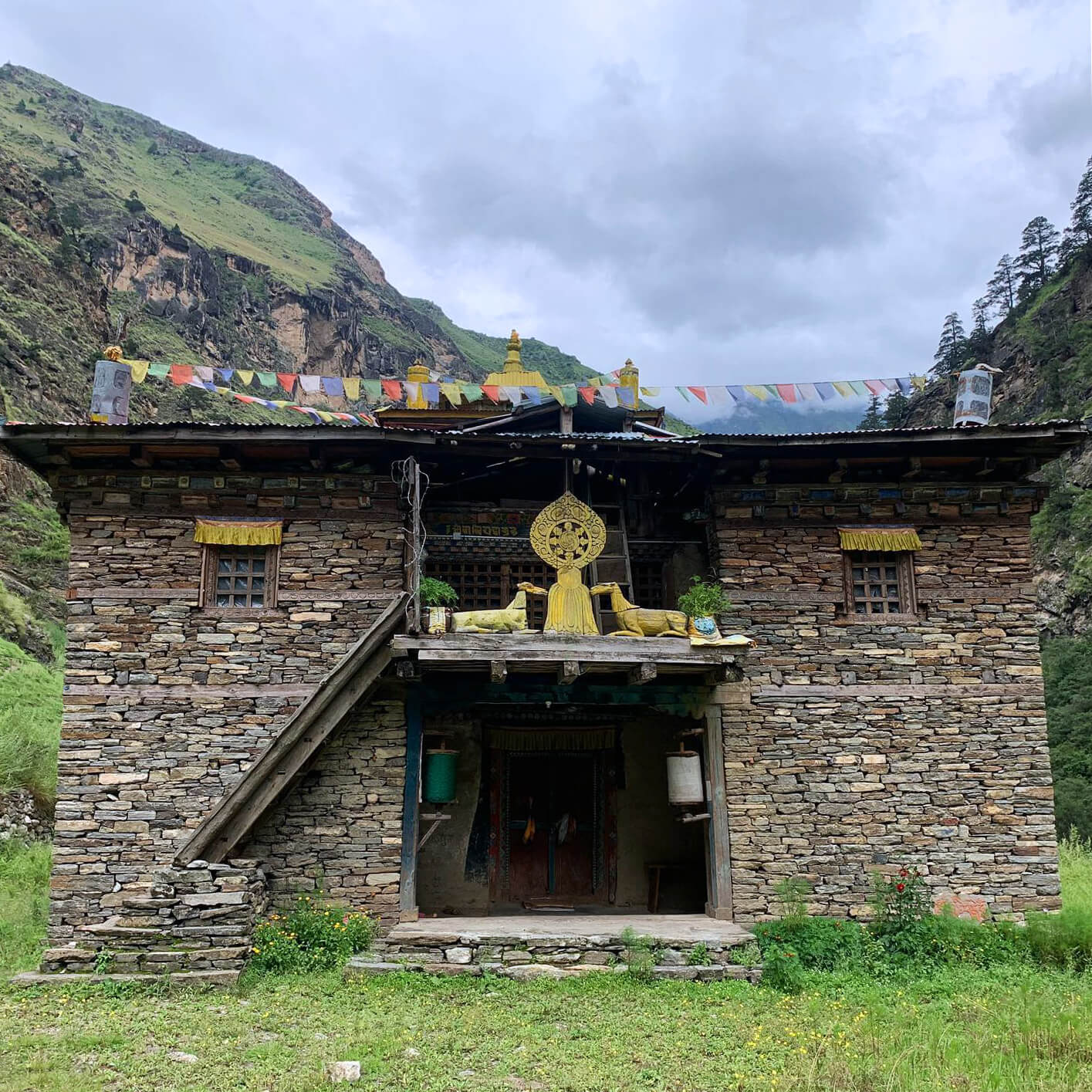