At 7:00 we started on the crust around the Crystal Mountain. Why she is Crystal is difficult to say. Maybe this is due to the abundance of pieces of quartz on the slopes of the mountain. But the guide says that this is a Tibetan name and only an advanced lama can explain its meaning. The "employee" of the monastery said that they were meditating on the mountain, but he also did not know why it was called that.

The bark around the Crystal Mountain is considered almost as significant an activity as the bark around Kailash, but there are fewer pilgrims in Dolpo (perhaps due to the inaccessibility of the place and the cost of permits - $ 500 per person for 10 days) 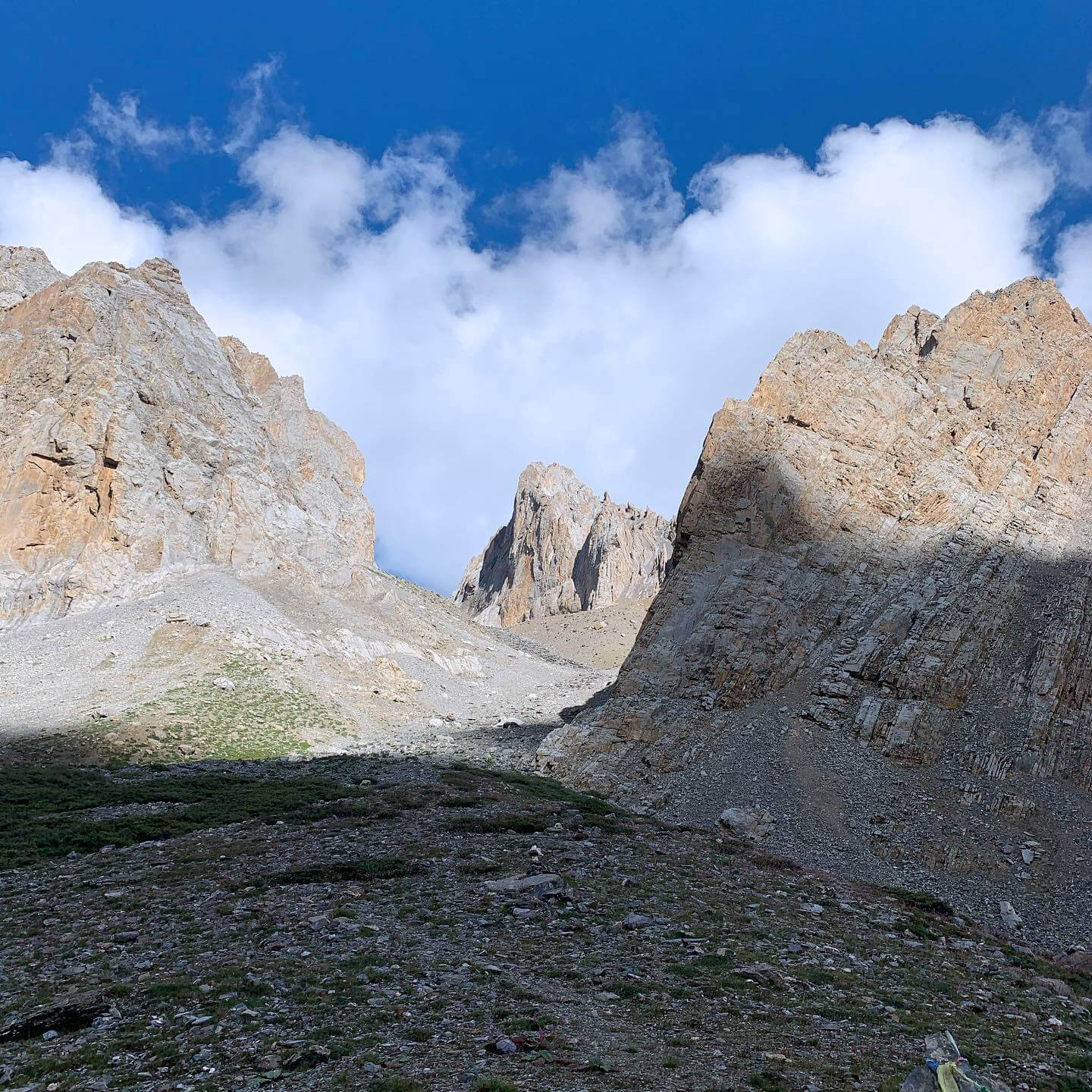 The mountain itself is smaller than Kailash: the height of the Crystal Mountain is 5566 meters, and the length of the crust is 18 kilometers. But, in my opinion, this crust is much more picturesque. The climb to the pass on the crust is 1000 meters (the pass at Kailash is much easier to overcome, since the climb there is only 500 meters). We managed a complete detour of the mountain in 7 running hours.

At a low altitude (up to 4500 meters), a huge number of ground squirrels live on the mountain. This time we examined them in detail, but we still didn't manage to take a picture - they are very shy and nimble animals.

About an hour and a half after the start, we reached a gorge that went deep into the mountain massif. The gorge is narrow and straight, the walls are painted with mantras. On this gorge, in fact, you need to climb to an altitude of about 5100 meters. At this height, the gorge turns into a rather wide valley, in which the Crystal Mountain itself is located. Scattered in the valley are many pieces of quartz from which pilgrims laid out mantras, swastikas and other symbols. There is really a lot of quartz. Until now on the route in such quantities we have not met anywhere else. And also, if you look, you can find here fossilized mollusks ... 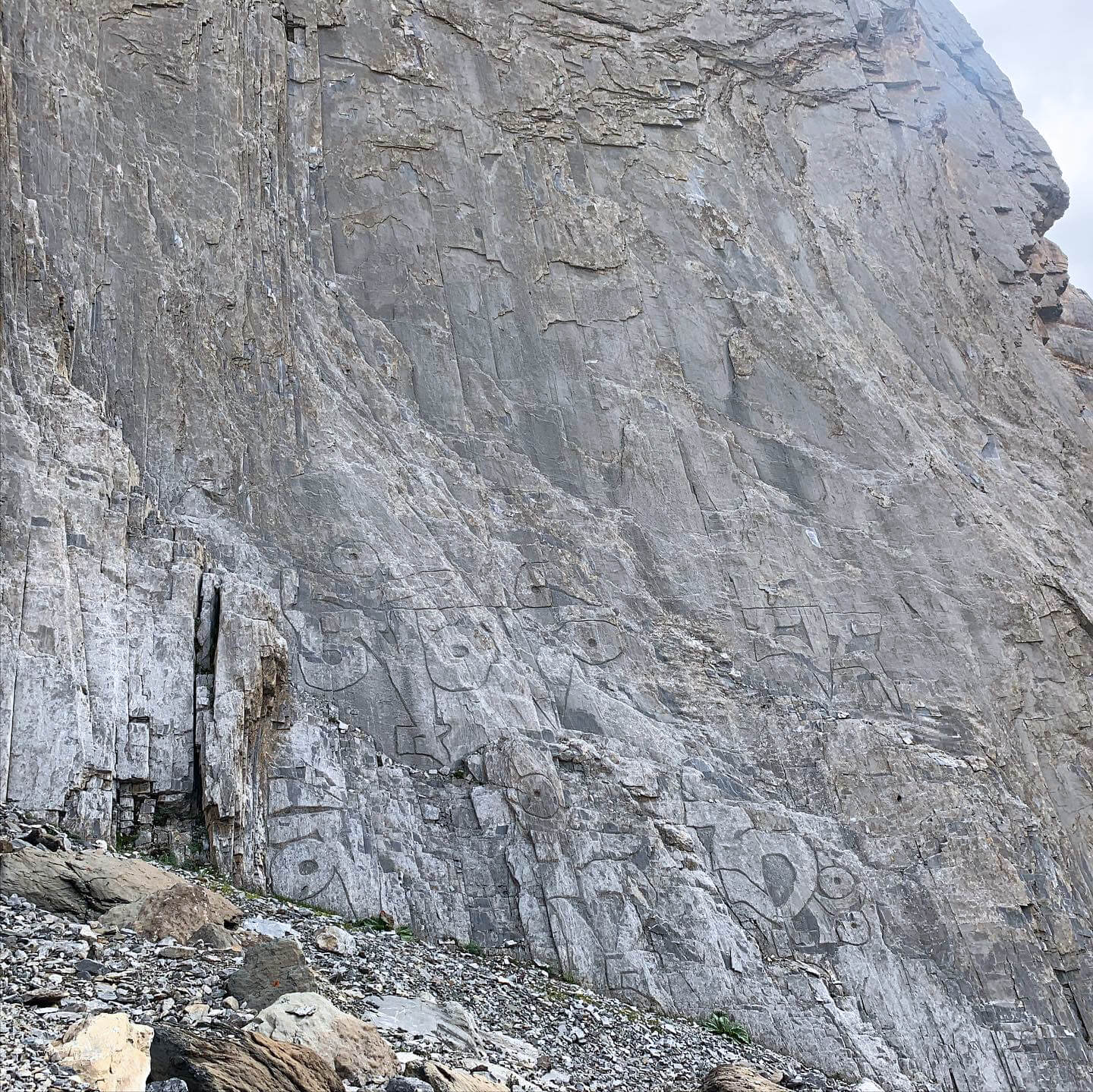 The valley is somewhat reminiscent of the landscapes of the second day of the crust around Kailash. The sensations of being in it strongly reminded me of the sensations I had in the gorge near the northern wall of Kailash. A very unusual feeling.

But the second part of the crust, after the 5350-meter pass (this is our fifth five-thousandth pass), does not look like the crust in Tibet at all. Here the trail goes along the side of the mountain at an altitude of about 4700-4900 meters above the cliffs and gorges. The views from the trail are stunning. 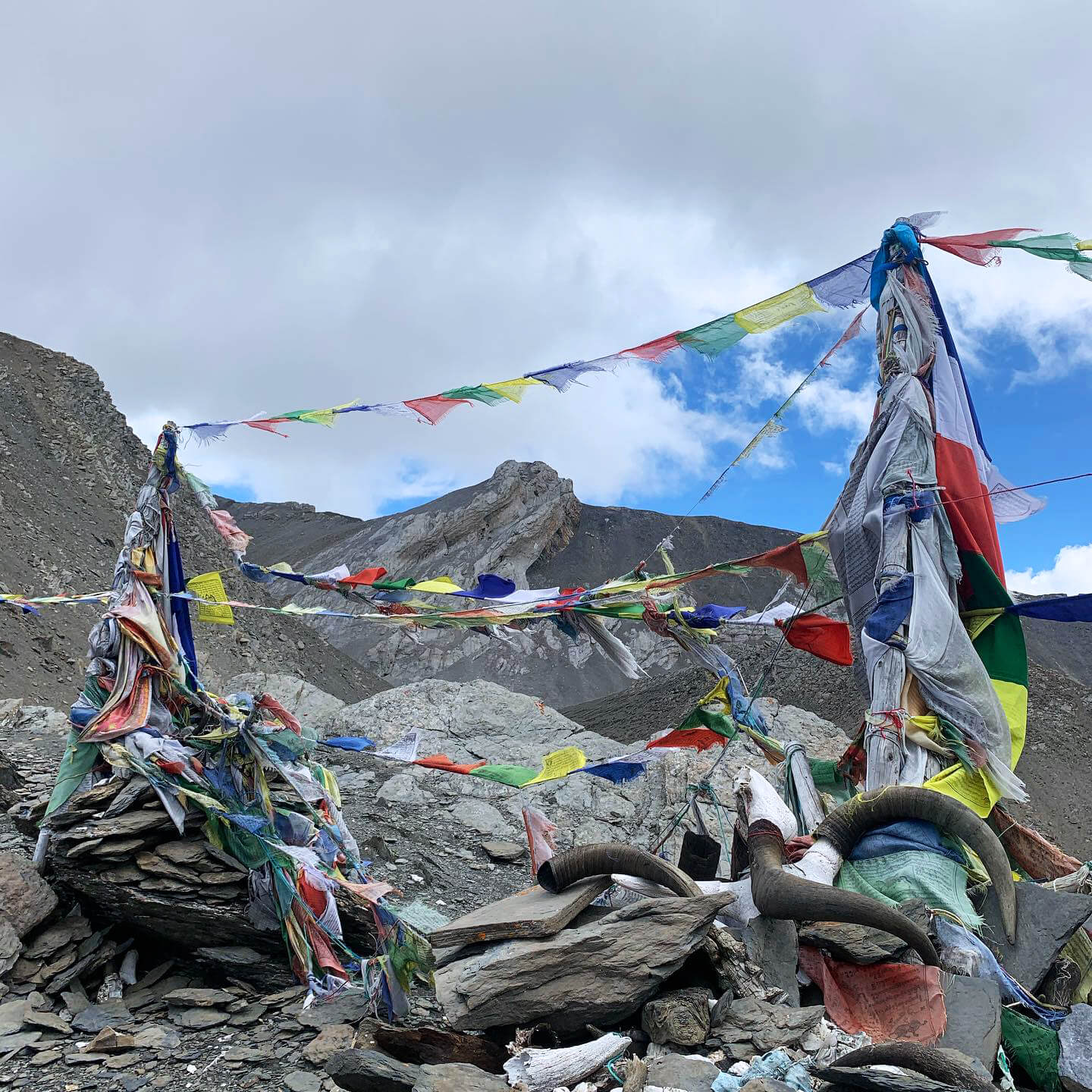 Along the entire route of the bark, pilgrims piled up heaps of quartz pieces of different sizes. From a distance, some of them look a lot like heaps of skulls.

And in Shey the holiday continues, but now it is not religious, but folk. For some time, people simply danced folk dances near the monastery to the sound of folk instruments, but towards evening everything was transformed into an ordinary drunkenness.

And at the end of today's text, a small tribute to E. Muldashev with his "City of Gods":

Of course, the Crystal Mountain is not just a mountain. This is a duplicate Kailash design, but significantly less power. The height of the mountain - 5566 meters - clearly hints at the connection between these structures (the height of Kailas according to Muldashev is 6 666 meters).

In the very center of the valley, in front of the Crystal Mountain itself, there is a surprisingly symmetrical pyramid, from under which a small river begins. Most likely, this pyramid hides inside itself some kind of aircraft or structure for another purpose, the liquid from the air conditioning system of which gives rise to the river. It really looks strange "just a spring" at an altitude of 5200 meters near a mountain on which there is no glacier.

A large amount of quartz around also speaks in favor of the version with an aircraft - the rock was sintered into quartz under the influence of high temperature during takeoffs and landings of aircraft in the valley.

It’s a pity, I didn’t have time to look for the entrance to the pyramid, or at least take samples of the water flowing from under it. Maybe Muldashev's followers will be interested in this place and organize a large-scale expedition, during which, for sure, new amazing discoveries will be made. 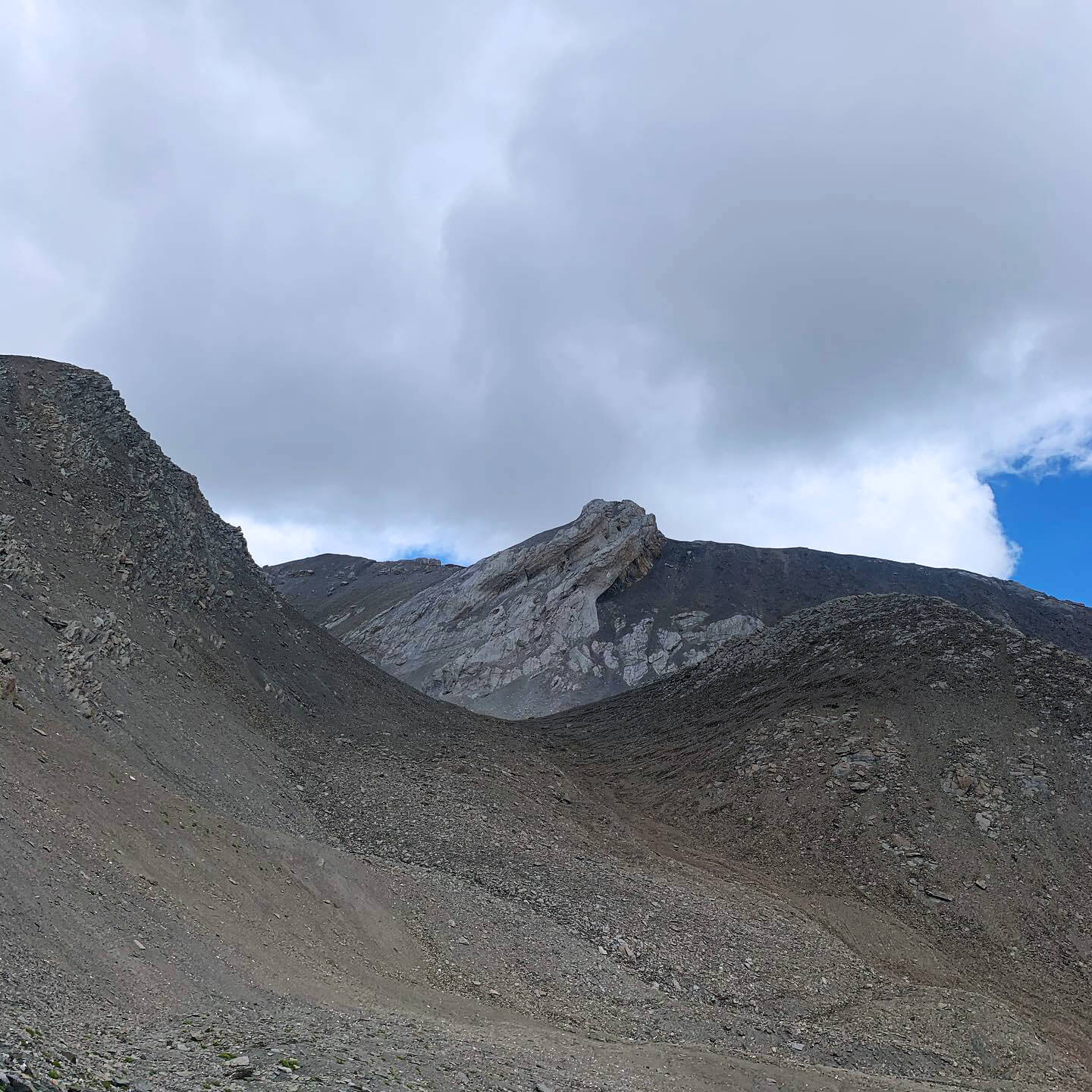 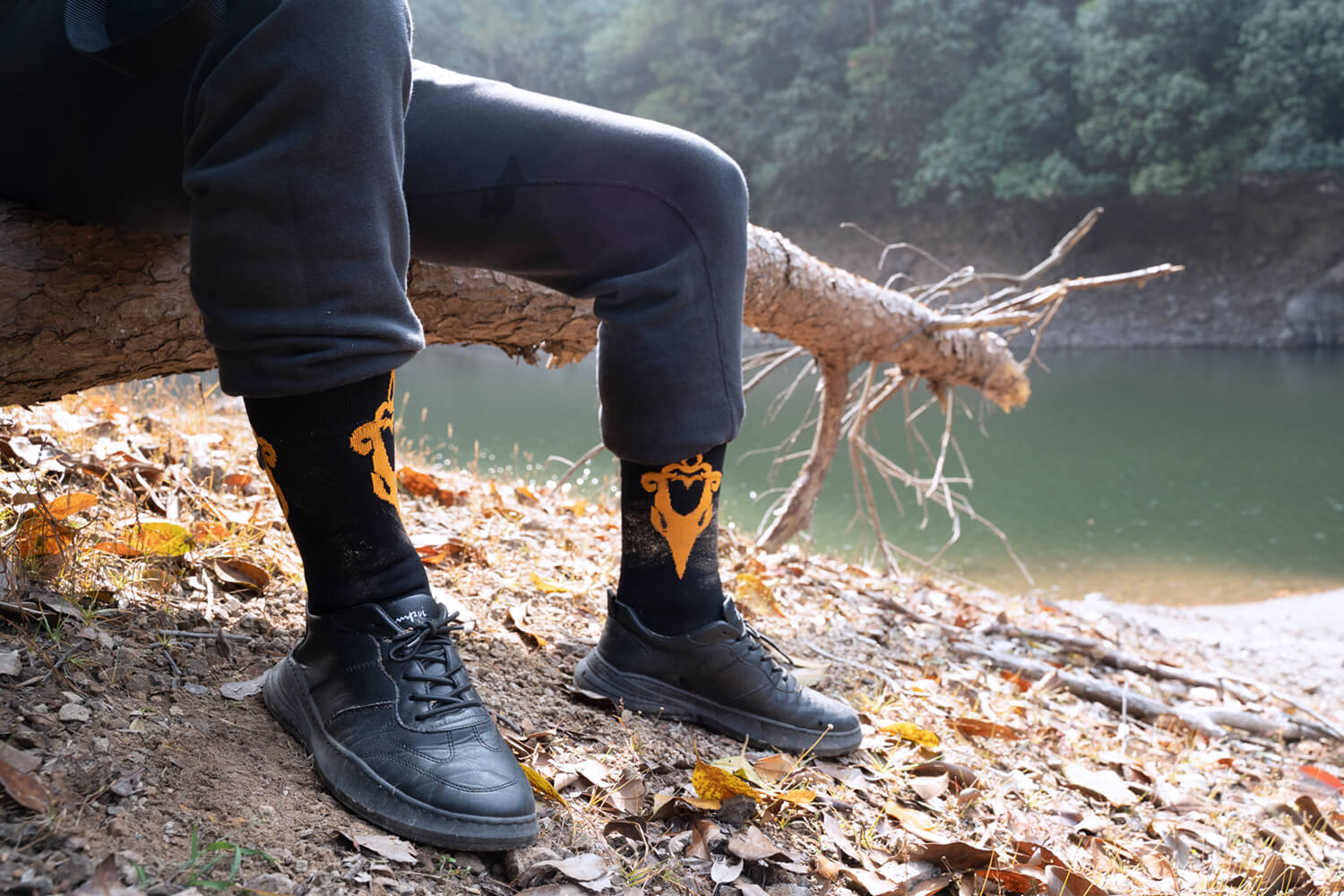